Driving a car comes with its own set of rules. You need to follow the motor laws of the country to ensure your own safety as well as the safety of people around you. Nonetheless, there are miscreants on the road who violate traffic rules for a thrill without realising the consequences of their actions. Major accidents can occur if people do not follow the traffic rules and violate the law. To avoid such accidents, traffic police are required to work day and night.

Traffic police regularly hold check-posts to inspect the passing vehicles. They conduct random checks to ensure that all motor laws and traffic rules are being followed by the vehicles on the road. The idea is to catch the miscreants on the road while ensuring adherence to the motor laws.

Chances are that you may have been stopped by the traffic police at least once while driving your four wheeler. When stopped, the first thing that the traffic police will ask you for will be to produce the documents of your car. As per the motor laws of India, every car driver must carry certain documents while using the vehicle. In case you are not sure which documents you need to carry or the traffic police can ask for, read on.

Documents Asked by the Traffic Police During a Car Inspection 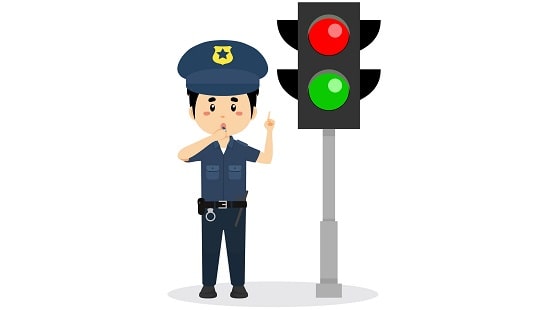 The traffic police can ask for the following documents in case they stop your car during an inspection:

In case you are unable to provide any of the above documents, you may land yourself into legal trouble. You may be either issued a challan or your RC or your car can get confiscated.

1. Cooperate With the Traffic Police

In case the traffic police signals you to stop your car and park it on the side of the road, you must listen to them. Remember to cooperate with them and do as you are told instead of trying to avoid the encounter. If you speed up your car instead of stopping and try to avoid the police, you may land yourself in serious trouble.

2. Pull Over Your Car Carefully

When you are signalled to stop your car by the traffic police, you must not hurry to the left without checking the ongoing traffic. Give an indicator to the left and carefully pull over your car while keeping an eye on the traffic. If you suddenly rush to the corner of the road without checking the incoming traffic, you can cause a major accident.

3. Pulling Over Your Car Does Not Imply You’ve Broken the Law

If your car has been pulled over by the traffic police, it does not imply that you have done something wrong. As stated before, traffic police stop cars randomly for regular checking. Besides, they may also ask you to stop your car if it is not working properly. For example, if your tyre is punctured or your door is not properly closed, the traffic police can stop your car to inform you about the same. Once you have heard the cop and shown them the documents they have asked for, you will be free to carry on your way.

As soon as you pull over your car on the signal of a traffic cop, remember to keep yourself calm and composed. Do not panic and hurry out of your car to speak to the cop. Instead, turn off the engine of your car, roll down the window and remain seated in the vehicle while the cop approaches you. Doing so will suggest to the cops that you are not running away or carrying anything illegal in your car. This will make your encounter with the cops is pleasing.

5. Speak to the Police Politely

When interacting with the traffic police during an inspection, remember to stay polite. In case you have broken a law, politely accept your mistake and apologize for it. Chances are that the cop may let you go without issuing a challan if you have made a minor offence. But it will not happen if you are rude to the cop and are not speaking politely.

6. Challan Book/ E-Challan Machine is Necessary to Issue a Challan

In case you have broken a motor law and have been stopped by the traffic police, remember to not pay any money to the cop unless a challan is issued. The traffic police can issue a challan only through a traffic challan book. They can also issue an online challan through an e-challan machine. If the police do not have either of the two, you are not liable to pay the challan amount.

7. Avoid Starting an Argument with the Cops

No matter how the situation is, avoid getting into an argument with the traffic police. If you are not at fault, explain your point of view politely to them. Listen to what the cops have to say and try to understand their perspective instead of arguing with them. In case you have broken a law, accept your mistake politely without making a fuss about it.

8. Do Not Try Bribing the Police

In case the traffic police stop your car for breaking a law, do not try to offer a bribe to the cop. Doing so can have serious consequences and you may even get arrested. Instead, pay the challan amount without arguing with the cop.

9. Your Car Can Be Detained

In some cases, the traffic police can also detain your car for breaking the law. For example, if your car is parked at a ‘No Parking’ area, the police will tow your car away and you will have to pay the challan amount to get your car back.

There can be instances when you may be detained by the traffic police for breaking the motor laws. For example, if you are caught drunk driving a car, you may be arrested. In case of detention, you will be produced before a magistrate for your trial within 24 hours.