Today, the Indian steel and iron manufacturing industries are dependent on the forging process. In this process, the metals are put into a forge before being rolled in rolling mills. This process is carried out to elevate and greatly enhance the properties of the forged metal. Due to the quality and pioneering work done by forging companies in India, and joining hands with the steel and iron industries in India, the Indian forging industry is enhancing its height day by day. The companies listed here are the best-forging companies in India: 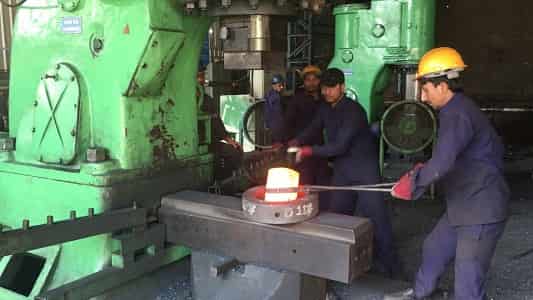 Ramakrishna Forgings Limited was established in the year 1981 as a well-known forged manufacturer and supplier. Obtaining TS 16949, ISO 14001 and OSHAS 18001 certifications, the company is leading the steel and iron manufacturing industry. They are known for closed and die forgings of Alloy Steel, Micro Alloy Steel, Stainless Steel and Carbon, produced keeping in mind the requirement of the clients. In addition to production, the supply of these products is unparalleled, which includes numerous forms such as heat treated, machined, forged and fully assembled. In addition, it has been allocating foreign and domestic market segment products such as draw gear assembly, frame key, bolster suspension, screw coupling, etc.

MCIE or Mahindra CIE Automotive Limited is one of the fastest-growing forging business manufacturers as well as suppliers. They have established their roots in India as well as in Britain and Germany. MCIE is widely occupied in producing world-class forged items and mechanized, which are used for industries like construction, mining, railway, agriculture, automobile etc. With a professional staff that has in-depth knowledge of engineering and designing of multi-part automotive parts, the company assures you to provide you with robust engineering capabilities.

Bharat Forge Limited is India’s largest private forging supplier in metal fabrication. Being one of the leading technology-driven global service suppliers, the company has expanded its footprint across the globe. Established in the year 1961, the company is catering to various industries related to Automotive, Oil, Power, Mining, Aerospace, Construction and Marine. The Pune-based company has entered into a joint venture agreement with Alstom, a popular French power producer, for the production of complex turbines and generators.

Ahmednagar Forgings is one of the pioneering and largest incorporated element producers in the country with a robust and vast global base. Over time, it has become one of the premium class and largest forging machining and comprehensively integrated firms. The company has earned a reputation not only in the Indian auto component markets but across the globe for its operations in aluminium and iron, machining, sub assembling and forging.

MM Forgings was established in 1946 but was introduced in 1974 as the leading forging division. It is one of the largest suppliers of forgings in India as well as internationally. The company is popular for being awarded the Engineering Export Promotion Council for Export Excellence. Over time, they have been rapidly increasing their forging properties and machining capability to meet the multiple needs of both our national and international customers.

Electrosteel is known as India’s leading and popular pipeline solutions service contributor. With an experience of over 5 decades, they have been consistently meeting the demands of the Ductile Iron Pipes of the clients both nationally and internationally. They specialize in machining which promises excellence and perfection. With India’s focus on strengthening its infrastructure, Electrosteel has been able to manufacture tons of hot metal which are used in the form of Iron, Wire Rod, TMT Bar, etc.

Jaiswal Neco came into existence in 1976 as one of the largest providers of steel and iron as well as manufacturer in India. Being a well-known company of NECO Group of Industries, the company has gained immense popularity. The company is spread across the states of Maharashtra and Chhattisgarh to cater to the multiple needs of the Engineering Power, Automotive Structural and Fastener Industries, Railways, Bearings, and many other sectors.

It is one of the popular and leading forging companies in India. Established in the year 1982, the company is exclusively passionate and dedicated to premium quality, making the firm renowned fame and name in this business. The company’s expertise and engagement depend on an array of providing Forge Valves, Fittings, Flanges that are used as Automobile Spares, and much more. The prime objective of the company is customer satisfaction and product excellence. They are popular for their expert and skilled experts who are engaged in various departments such as Fetting Department, Heat Treatment Department, Grinding Department, Testing and Checking Department, Die and Tool Making Facility, Technocrat, and many more.

It is one of the popular integrated and forging component service distributors considering both domestic and international levels. With a vast and strong global presence, it has become a respected global forging and integrated machining firm. The company is recognized for promoting operations around machining, aluminium casting, forging and sub-assemblies. AMTEK is equipped with services and facilities spread overseas including the US, UK, Germany, Romania, Italy, Brazil and others.

It is a renowned forging company in India and is counted as a pioneer. The company is renowned for working within the machine tool sector and types of metal forming. Its background is related to accessories and machine tools. During the year ended March 2014, as per the detailed information and analysis, the revenue and sales of Amforge were INR 3.30 Million. Being one of the largest well-known forging companies, it has a worldwide reputation.

The companies given above have the skills of manufacturing raw materials like stainless steel, alloy steel, carbon steel, titanium, aluminum, brass, copper etc. It is a vital element for all the industries and sectors driving the growth of India. These include construction and mining equipment, electricity, automobiles, industrial machinery, general engineering and railways.